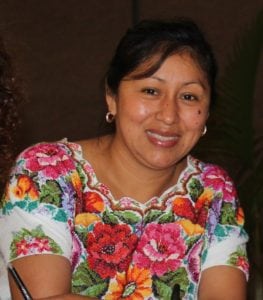 Veronica joined Rise Up in 2009 as part of the first cohort of leaders from Guatemala, and she became Rise Up’s Guatemala Country Representative in 2013. Veronica helps oversee Rise Up’s network of 45 leaders in Guatemala and is their point person and a key source of technical support for all Guatemala grantees. She also helps Rise Up organize and implement institutional strengthening workshops in the country. She specializes in working with indigenous women and girls. Veronica has a Bachelor’s Degree in Social Work with an emphasis on Development from Rafael Landivar University in Guatemala and has two young girls of her own.