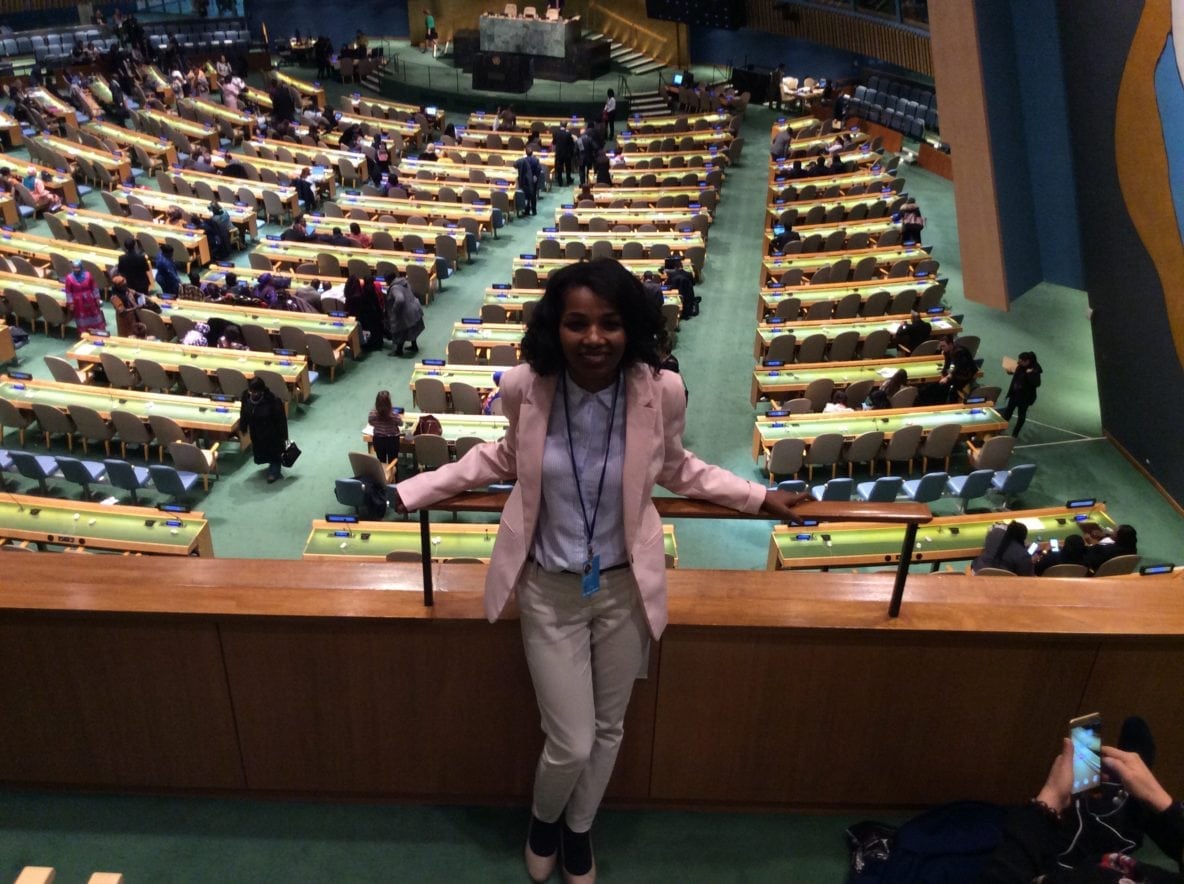 The United Nations 62nd Session of the Commission on the Status of Women(CSW62) took place at the United Nations headquarters in New York City from March 12-23, 2018. According to UN Women, more than 4,300 representatives from over 600 civil society organizations and 170 Member States attended. The CSW62 theme was “Challenges and opportunities in achieving gender equality and the empowerment of rural women and girls.” With the recent adoption of the Sustainable Development Goal (SDGs), the meeting drew experiences from the Millennium Development Goals (MDGs) to address the strategic role of women and girls in achieving the SDGs by 2030.

Rise Up Youth Champion Marta Tsehay attended the event for the first time as a young emerging leader from Ethiopia representing Moremi Initiative for Women’s Leadership and Rozaria Memorial Trust.

I found it quite exceptional to take part in this kind of global event. Due to the challenges involved in obtaining a U.S. visa and financial resources, CSW was attended by few young people. I participated, representing Moremi Initiative for Women’s Leadership and Rozaria Memorial Trust as a young emerging leader from Ethiopia. This enabled me to attend the world’s biggest meeting on gender equality and also to share my story as a young woman leader from Ethiopia.

The official opening of the CSW was led by UN Women Executive Director Phumzile Mlambo-Ngcuka. Her speech highlighted the importance of addressing the challenges faced by women living in rural areas. She further emphasized that change is always possible if there is strong leadership.

The programs of the CSW were well designed with 440 events. I attended different panels on topics such as the role of women as governance actors; leaving no one behind for planet 50-50 by 2030; empowering rural women and girls; the use of technology to address challenges in rural areas; and other relevant topics.

Participation at CSW62 created ample opportunity to share my experiences with developmental issues from Ethiopia. On a panel discussion about the role of faith-based organizations in eradicating gender-based violence and early child marriage organized by Women’s Rights and Empowerment Partnership in Africa (WREPA) and Rozaria Memorial Trust (RMT), I shared the experience of faith-based organizations’ engagement in correlation with development. At one of the CSW side events about leveraging technology for girl’s empowerment in Africa, I had an opportunity to present my research findings on “Mobile for Students’ Reproductive Health (M4SRH)” intervention. The intervention was initiated following the Youth Champion Initiative (YCI) award I received from Rise Up, the Public Health Institute (PHI), and the David and Lucile Packard Foundation. On the panel, the use of technology in addressing reproductive health challenges of university students was shared and discussed.

I addition, Youth Dialogue hosted an event at CSW62 that focused on amplifying youth voices on an international platform. The program was attended by more than 400 participants from different countries from different professional and ethnic backgrounds. The Secretary General’s Envoy on Youth, Jayathma Wickramanayake, moderated an intergenerational dialogue with young activists on health, climate change, land rights and environment, education, gender-based violence, early child marriage, economic justice, media, and technology.

The biggest highlight of the CSW for me was the cultural innovation created by Rozaria Memorial Trust’s Nangha Binti. Nhanga-Binti Conversations is an African curated and branded physical space for engagement. Nhanga is a Shona/Bantu word that refers to the girl’s room and Binti is a Kiswahili word, meaning “for girls.”  This unique space is one of the first of its kind and is a safe space to discuss the challenges and opportunities of women and girls. This platform served as a space to change the narrative of Africa and also a global space for advocacy and networking on women and girls.

The key lessons I took from my participation in CSW62 are the importance of young people’s participation on global platforms like CSW; the value of intergenerational dialogue and cultural innovation; and the need for regional collaboration for effective programming.

On several occasions, it was reported that youth participation on CSW is increasing from time to time. Nonetheless, for some of us who traveled more than 600 miles to the United Nations headquarters, some of the key and main programs of CSW were not accessible and we were prevented from taking part in some sections of the programs. I hope that will change. Young people should be allowed and be trusted to take part in the “adult conversations,” as it is the young people who are both the present and future leaders of these conversations. We should not just be invited to window-dressing, but be invited as colleagues and partners. I would like to dutifully suggest that major platforms should be accessible for young people to meaningfully influence and make a significant contribution to decision making.

The unforeseen reality of CSW that occurred to me was during my participation on the youth forum; I was the only Ethiopian youth participant in the forum. Many people might enjoy the idea of being the only one and the first one. However, for me being the only Ethiopian in that room was quite disappointing and shocking and it made me raise a question: “Where are the Ethiopian youth?” I know there are so many young visionary Ethiopians playing a leading role in Ethiopia, but they were not able to take part in this global platform. I hope the government of Ethiopia, the youth in Ethiopia, developmental organizations, and international and UN agencies will create opportunities for young people to meaningfully participate in global platforms. Furthermore, I believe that the representation of the country by a few Ministers and individuals is not sufficient. A country should be represented by different groups in order to bring effective participation, representation, and fruitful outcome.

I would like to extend my gratefulness to the Moremi Initiative and Youth Champions Initiative, and I am equally grateful for the support provided by Rozaria Memorial Trust and Plan International.