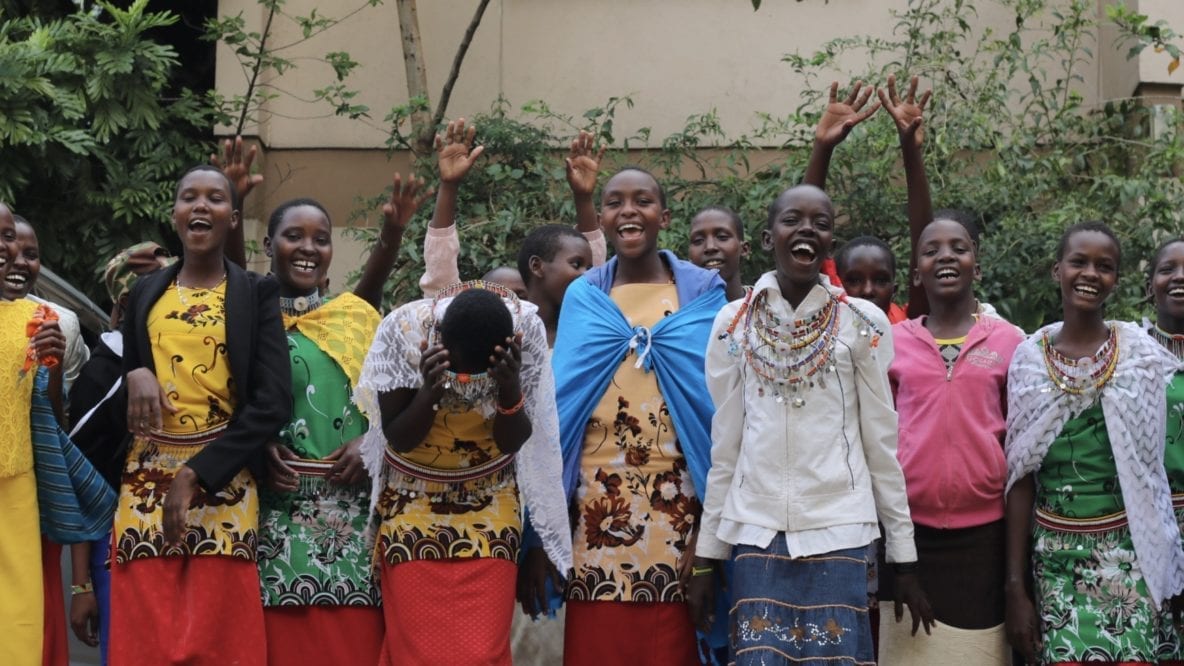 By Mary T. Chandler – Chief Executive Officer of the Cummins Foundation and Vice President of Corporate Responsibility for Cummins, Inc. Originally posted on Cummins.com on October 11, 2018.

Women and girls are half the world’s population. When women and girls advance, we all move forward. The Masai ethnic group in central and southern Kenya are pastoralists, moving to and from areas raising livestock. Their society is strongly patriarchal; male elders decide most major matters for each Masai group. But Cummins Powers Women partner Rise Up is working to change this.

Rise Up’s Girls’ Voices Initiative (GVI) enables Kenyan girls to learn about girl-centered advocacy, leadership and how to develop their own strategies to improve girls’ lives. Rise Up is one of eight non-profit organizations Cummins is partnering with through the global Cummins Powers Women program, Cummins’ commitment to the advancement and prosperity of women and girls around the world.

Peris is a 14-year-old Masai girl with a mighty voice, advocating to keep Kenyan girls in school. She is one of 24 girls participating in the GVI to stand up for change. Together these girl leaders are advocating for legislation to bring an end to female genital mutilation (FGM) in Kenya. “I was inspired to work on issues affecting girls in my community because girls have been undergoing many problems, including FGM, early marriage, teen pregnancies and dropping out of school,” Peris explained.

“I attended the training and learned that a girl was not put on this earth to be invisible and not given life only to belong to someone else,” she said. “I learned that girls can also be confident in their future and focus forward as the boys can do. I learned that I can speak up for girls’ rights.”

Today, on International Day of the Girl (Oct. 11), Cummins celebrates young female leaders like Peris, who are working to change their current reality. Consider these facts:

•    Globally, nearly 15 million girls under age 18 are married every year – or 37,000 each day.
•    One in three girls aged 15-19 has experienced some form of female genital mutilation in the 29 countries in Africa and the Middle East.
•    600 million girls live in poverty.
•    Every additional year of schooling for a girl increases her future earnings by 10 to 20 percent

Although Kenya’s Female Genital Mutilation Act (2011) prohibits FGM nationwide, the practice remains common in certain regions. The prevalence of FGM in Peris’ community of Kajiado County is among the highest in the nation, affecting about 73 percent of women and girls (KDHS, 2014).

Thanks to the training they received from Rise Up, Peris and her fellow girl leaders advocated for their rights. Together, they asked for support from the school chairmen, teachers and boys, and within their community, speaking with key chiefs and village elders.

Their leadership and advocacy resulted in the Members of the County Assembly implementing the FGM Act in Kajiado County. This is exponential change, and that’s why Cummins is partnering with Rise Up and other organizations advocating for women’s advancement around the world.

The Cummins Powers Women program represents the next phase of Cummins’ commitment to large-scale community impact and powering a more prosperous world. The program has started projects in seven regions around the world, reaching more than 1,500 people in 10 countries.

The company’s investment of more than $10 million will support a range of effective programs already underway:

The positive and inclusive environment for women at Cummins is the catalyst for us to dream about a future for all women and girls that includes abundant opportunity for global leadership, invention, skill and creativity. That’s why Cummins is lending its powerful voice in communities to cause exponential change in the lives of women and girls.