From the Children’s Act to the Girls’ Manifesto and a seat in the House of Representatives, Rise Up leaders Aisha and Rosana are fiercely advancing girls’ rights in Liberia.

In 2010, Rosana Schaack, Executive Director of THINK (Touching Humanity In Need of Kindness), met Aisha Cooper Bruce, Program Director for Social Empowerment at HOPE (Helping Our People Excel), through Rise Up’s Let Girls Lead program in Liberia. Rise Up selected the two women to be part of our first cohort of Liberian leaders. At Rise Up’s week-long Advocacy and Leadership Accelerator workshop both women learned with an international cohort of leaders from Ethiopia and Malawi how to develop effective advocacy strategies, mobilize resources, and engage girls and decision makers in their work. During the Rise Up convening, these visionary leaders realized that they shared a mutual interest in Liberia’s Children’s Act and could leverage one another’s expertise to maximize their chances of successfully advocating for passage of the law.

The Children’s Act would comprehensively address the needs of Liberian children in a major way. The bill would secure children’s rights to education, healthcare, and inheritance, among many other significant provisions. It would mean that for the first time in the country’s history, every Liberian child would be guaranteed rights in accordance with the Convention on the Rights of the Child and the African Charter. Importantly, this law also specifically addressed many problems that disproportionately affect girls, including limited access to education, widespread sexual exploitation, and harmful traditional practices.

After the Accelerator, Rosana and Aisha submitted a joint proposal and Rise Up funded them to implement their advocacy strategy for the passage of the Children’s Act. With Rise Up’s technical support, HOPE and THINK adopted a multi-faceted advocacy approach, which included partnering with government ministries, meeting with senators, engaging with existing networks, training adolescent girls and youth activists, and using the media to raise community awareness. THINK had been working on adolescent girls’ health for many years and was actively participating in many established networks and partnerships. HOPE had been working on adolescent girls’ empowerment and provided expertise in communications strategy and youth development. Understanding the importance of strategic partnerships, HOPE and THINK actively participated as members of the Child Protection Network and collaborated with UNICEF Liberia and the Liberian Ministry of Gender and Development on their advocacy initiative.

Aisha and Rosana also built the capacity of the Children’s Parliament, the highest advocacy and representative body for children in Liberia. Together, they trained over 70 adolescent girls and youth activists, including those from the Children’s Parliament as well as local girls’ clubs, on children’s rights, and they gave them the tools they needed to advocate on their own behalf. These young people, like 14 year-old Shennel, became an integral part of the campaign, advocating directly in the Senate for passage of the Children’s Act. After a year of advocacy efforts by civil society groups and youth leaders, the Liberian Senate passed the Children’s Act on September 15, 2011. The Act became one of the most comprehensive pieces of children’s rights legislation enacted in Africa, representing a monumental step forward for adolescent girls in Liberia.

Since the passing of the Children’s Act, Aisha has continued to make great strides in advancing the rights of girls in Liberia through girl-centered advocacy and youth leadership development. In addition to her continued work with HOPE,  Aisha has been Rise Up’s country representative for Liberia since 2011, serving as the focal point for all Rise Up Leaders and grantees in Liberia.

With Rise Up’s continued support and in partnership with Girl Up, HOPE has established “Girl Clubs” in nine public schools across five counties in Liberia, empowering young girls with knowledge of their rights and encouraging them to become leaders in their community.

“These young ladies are real advocates,” said Aisha. “We have a generation of young women who know that they have rights and the ability to make lasting change in their lives and in the lives of other girls. They say, ‘I do have a voice.’ Their level of confidence, energy, exposure, and opportunity have opened up, and amazing girl leaders are developing.”

HOPE also established the Girls Advocacy Forum, a network of more than 200 girls who have been trained as advocates throughout Liberia, promoting awareness and advocacy for laws and policies that affect girls. Aisha’s hard work has led HOPE to one of its greatest policy accomplishments—the creation and adoption of the “Manifesto for the Development and Empowerment of the Liberian Girl Child.” The document was created by the Girls Advocacy Forum and was endorsed by former President of Liberia Madam Ellen Johnson Sirleaf in 2016. The Girls’ Manifesto specifically highlights priority issues for the empowerment of adolescent girls and young women, such as sexual and reproductive health and rights, education and personal leadership development, and cultural and traditional practices.

HOPE continues to drastically improve opportunities for girls in Liberia with support from Rise Up. They partner with key private and public-sector stakeholders like the Ministry of Gender and Children and Social Protection in Liberia to implement the Girls’ Manifesto. The full implementation of the Girls’ Manifesto in Liberia will strengthen and protect the legal rights of girls and women—including their right to obtain an education in a safe environment, free from harassment, molestation, or abuse. Adoption of the Manifesto will also create leadership and career development programs and services within their schools, enabling more girls and women to reach decision making positions. After several consultations with national stakeholders, the Girls Advocacy Forum developed the Girls’ Manifesto three-year implementation strategy for 2018-2021. This document is the official guide that stakeholders will use to inform funds, development, and program implementation as its relates to adolescent girls in Liberia. The national roll-out of the strategy started in March 2018.

“My belief is that when there are more women in leadership positions, we will have less of these social, cultural, and health issues that adolescent girls face,” said Aisha. “We are raising a generation of women who will be the new decision makers. And we won’t have to deal with leaders who don’t understand or prioritize women’s and children’s issues because women will be the new decision makers.”

Under the Girls’ Manifesto, girls will also have rights to adequate information and services for their sexual, reproductive, and mental health. Survivors of sexual, physical, and mental abuse will have the right to hold offenders accountable for their actions and the ability to receive treatment and counselling. Harmful traditional practices such as negative disciplinary measures and child marriage will no longer be allowed, and the government will be accountable for ensuring that girls’ rights are protected. 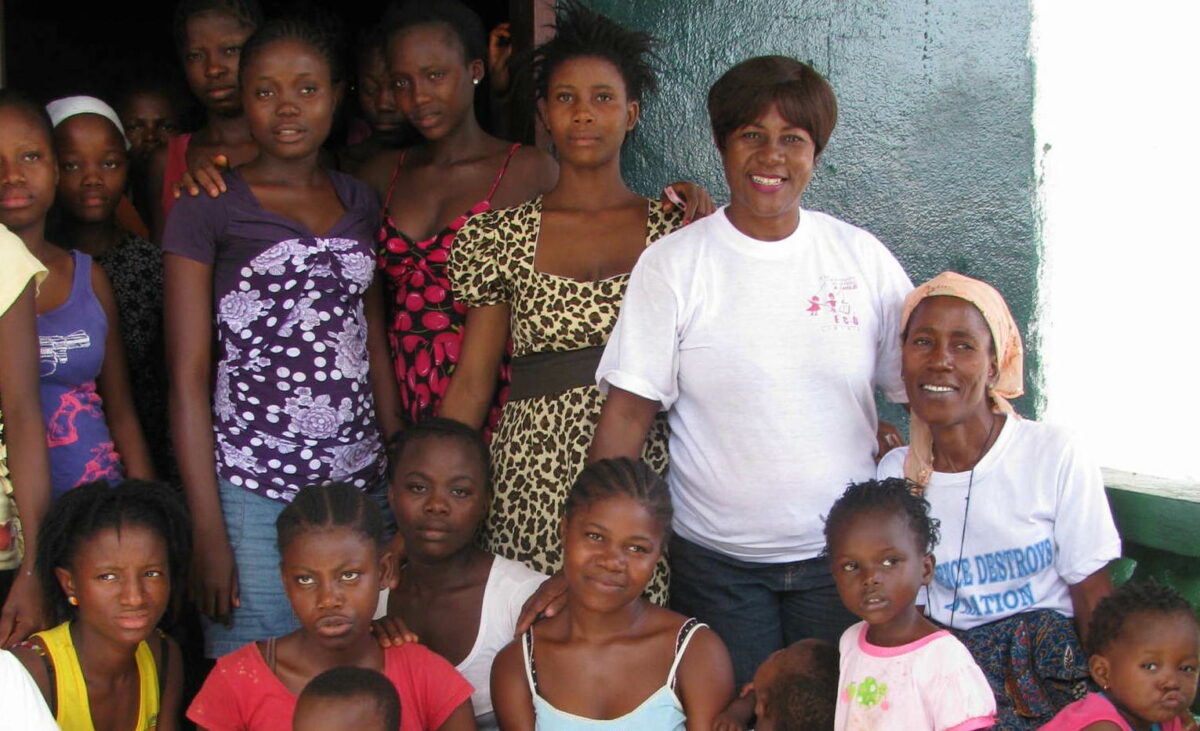 Rosana, right, with residents at the THINK safe home in Liberia.

Rosana has also continued to be an unstoppable force for girls and women in Liberia. Through her organization THINK, she runs a safe home, transit center, and a one-stop clinic for girls and women, offering services and programs that provide shelter, safety, medical care, counseling, vocational training, and life skills for girls and women. Her impact and dedication do not stop there. Rosana was recently elected to the House of Representatives in Liberia, becoming the first woman EVER to represent her district.

Like Aisha, Rosana also firmly believes that for girls’ and women’s issues to be prioritized, more women need to be in decision making positions.

Rosana believes it is vital for women to participate in the direction of the country’s development, and she is leading the way.

In office, one of the things Rosana plans to focus on is female economic empowerment. “My goal is for women and girls to generate their own income. Girls and women need to be able to develop their educational skills and earn a living by making use of the natural resources around them. In doing so, women will have more opportunities and the freedom to live the life they want.”

This dynamic duo successfully passed the Children’s Law, are working to implement the Girls’ Manifesto, and continue to do so much to advance the health, education, and equity of Liberian girls and women. Rise Up is grateful to have these phenomenal women in our network creating large-scale change through girl-led advocacy and leadership. Together, we are activating girls and women to transform their own lives, communities, and countries for a more just and equitable world.