I was teaching my last class of the quarter at UCSF, when my phone rang during the lecture. Our nanny called to tell me excitedly that my three-year old son had just pooped on the potty (a journey long in the making) — she wanted to give him a special treat and needed to know where in the kitchen to find the hidden contraband cookies.

Denise Raquel Dunning (top right), founder and Executive Director of Rise Up, with the Master’s in Global Health students at the University of California, San Francisco.

Earlier in my life and career, I would have made up a fake, professionally-acceptable excuse and left the room. But today, I stood in front of this group of global health masters students, and thought about how many of them will someday soon take on the three-ring circus of balancing careers and family — juggling kids, partners, international travel, potty training, bosses, PTA meetings, dance classes, funders, nursery school coops, doctors’ appointments, soccer games, aikido, birthday parties, and on, and on, and on. And how no one tells them what that’s like.

So I decided to tell them the truth, which for me is this — when our nanny calls, I always answer, no matter what. And yes, pooping on the potty is in fact a very, very big deal. And when my six-year old had strep last week, I led video calls while sitting next to her on the sofa. I told them that it is possible to have a career and a family, but that it often feels like juggling 27 balls in the air while wearing stilettos and a mermaid bathing suit.

And while this juggling act is sometimes completely crazy-making, I also told them that my family is a blessing I wouldn’t trade for anything. And that I’m incredibly privileged to be part of an organization and a team that support me, and to have a partner and a nanny who make any of it possible. And that even with all of these resources, there are many days that the juggling act would completely fall apart — were it not for a community of parents who jump in to help, grandparents who come in to save the day, and wonderful friends who keep me sane, at least mostly.

I also told them that women around the world face these realities every single day, overcoming far greater obstacles and with far fewer resources. I told them about women leaders in Rise Up’s network who have no option but to bring their children with them to work. 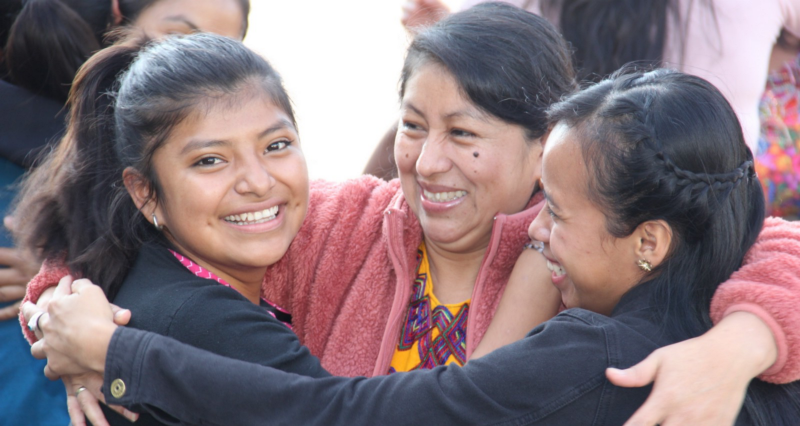 Rise Up’s Veronica Buch (center) at a training for adolescent girls in Guatemala this January.

I shared the story of Veronica Buch, a Guatemalan Rise Up leader who spent years bringing her young daughter Melody to work with her. Holding Melody on her hip, Vero led empowerment trainings with indigenous girls, encouraging them to finish school and fight for their dreams. With Melody in tow, Vero met with national leaders to talk about why the education, health, and rights of girls matter — not just for girls themselves, but for the wellbeing of all Guatemalans. And as Melody grew up seeing her mother speak out for change, she too become a leader — advocating for a successful national campaign to ban child marriage in Guatemala and now blazing her own trail for girls’ rights.

I also told the students why I was telling them all of this — the hopes, frustrations, and realities I would never have dared to share earlier in my journey. Because as women, we too often make invisible our families and our choices, feeling like having a family somehow diminishes us professionally. I told them why I finally chose to stop making excuses for having a family — because by owning our choices, we give those around us the power to do the same. And I told them that someday they too will likely be in positions to validate those choices or deny them, both for themselves and for those who follow in their footsteps. And that nothing really changes until we each recognize and own the power we have to create change, in ways both big and small — and that sometimes the small changes become big ones in ways we can’t even imagine or predict.

And then I finished the lecture, went home, and gave my son a cookie.